Romania has significant low enthalpy (50-120°C) geothermal resources suitable for direct heatutilization: space heating, tap water heating, greenhouse heating, fish farming, animal husbandry,aquaculture, health and recreational bathing etc. Practical accomplishments of the last ten yearsare rather modest: Beius, Cighid, Oradea and Calimanesti-extension. These projects wereintended either for modernizing the equipment and management of existing geothermal systems,or for the exploitation of new reservoirs. Some of these projects involved consultants from WestEuropean countries, and have been awarded financial support from the European Union. The completion of these projects took a long time and great efforts, as they required legal andfinancial conditions quite new for this part of Europe.

The geothermal systems discovered on the Romanian territory are located in porous permeableformations such as Pannonian sandstone, interbedded with clays and shales specific for thewestern Plain, and Senonian specific for the Olt Valley. Some geothermal systems are located incarbonate formations of Triassic age in the basement of the Pannonian Basin, and of Malm-Aptian age in the Moesian Platform. The main geothermal reservoirs in Romania are located inOradea, Bors, Beius, Ciumeghiu, Olt Valley and Otopeni (Figure 1). 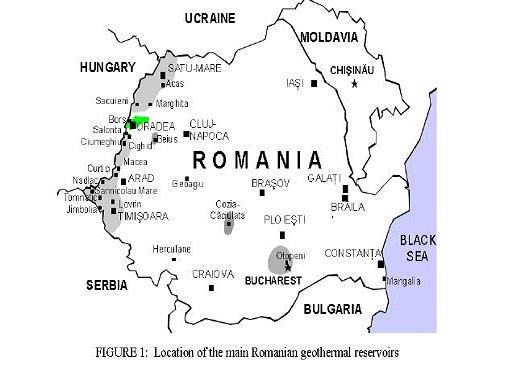 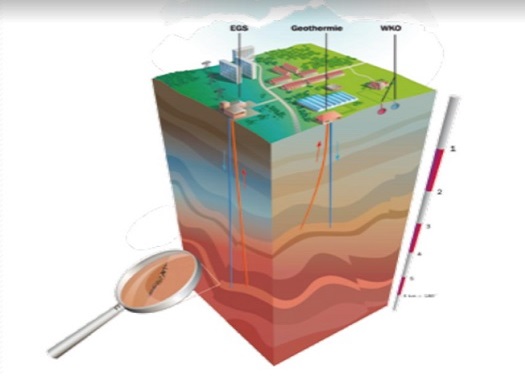 The Oradea geothermal reservoir is located in the Triassic limestones and dolomites at depths of 2,200-3,200 m, on an area of about 75 km2 , and it is exploited by 14 wells with a total maximum flow rate of 140 l/s geothermal water with well head temperatures of 70-105°C. There are no dissolved gases, the mineralisation is 0.9-1.2 g/l, the water being of calcium-sulphate-bicarbonate type. The Oradea Triassic aquifer is hydrodynamically connected to the Felix Spa Cretaceous aquifer, and together are part of the active natural flow of water. The water is about 20,000 years old and the recharge area is in the northern edge of the Padurea Craiului Mountains and the Borod Basin. Although there is a significant recharge of the geothermal system, the exploitation with a total flow rate of over 300 l/s generates pressure draw down in the system that is prevented by reinjection. Reinjection is the result of successful completion and beginning operation of the first doublet in the Nufarul district in Oradea city, in October 1992 (Lund, 1997). The Felix Spa reservoir is currently exploited by more than ten wells, with depths between 50 and 450 m. The total flow rate available from these wells is 210 l/s. The geothermal water has a wellhead temperature of 36-48°C and is potable. The annual utilisation of geothermal energy in Oradea is representing about 30% of the total geothermal heat produced in Romania.

Bors geothermal reservoir is situated about 6 km north-west of Oradea. This reservoir is completely different from the Oradea reservoir, although both are located in fissured carbonate formations. The Bors reservoir is a tectonically closed aquifer, with a small surface area of 12 km2 . The geothermal water has 13 g/l of total dissolved salts (TDS), 5 Nm3 /m3 gas-water ratio (GWR), and a high scaling potential, prevented by chemical inhibition. The dissolved gasses are 70% CO2 and 30% CH4 . The reservoir temperature is higher than 130°C at the average depth of 2,500 m. The artesian production of the wells could only be maintained by reinjecting the whole amount of extracted geothermal water, and of colder water from shallower wells during the summer. In the past, three wells were used to produce a total flow rate of 50 l/s, and two other wells were used for reinjection, at a pressure that did not exceed 6 bar. The geothermal water was used for heating 12 ha of greenhouses (now bankrupt, stopped operation). The dissolved gasses were partially separated at 7 bars, which is the operating pressure, and then the fluid is passed through heat exchangers before being reinjected. The installed power is about 8 MWt, and the annual energy savings was about 3,000 toe. This reservoir is currently not exploited at all. In January 2014, Transgex S.A. restarted the production from one well, supplying primary heating agent to two commercial companies in the area (about 17 TJ/yr.).

The Beius geothermal reservoir is situated about 60 km south-east of Oradea. The reservoir is located in fissured Triassic calcite and dolomite 1,870 – 2,370 m deep. The first well had been drilled in 1996, down to 2,576 m. A line shaft pump was set in the well in 1999, now producing up to 45 l/s geothermal water with an 83°C wellhead temperature. A second well had been drilled in early 2004, and a line shaft pump was installed later that year and can also produce up to 45 l/s geothermal water with an 85°C wellhead temperature. A third well was drilled in 2010 and is used to reinject the heat depleted geothermal water from the closed-loop systems. The geothermal water from the two production wells has low mineralization (462 mg/l TDS), and 22.13 mg/l noncondensable gases (NCG), mainly CO2 and 0.01 mg/l of H2S. The geothermal water from both wells is currently used to supply district heating to part of the town of Beius (for a district heating system with 10 substations supplying a block of flats area, two hospitals, two schools, public buildings, for a heating system of many individual houses in open loop, swimming pool, etc.).

The Ciumeghiu geothermal reservoir is also located in the Western Plain, 50 km south to Oradea. The geothermal water has a wellhead temperature of 105°C and high mineralization (5-6 g/l TDS), with strong carbonate scaling potential (prevented by chemical inhibition at the depth of 400 m). The aquifer is located in Lower Pannonian age gritstone, at an average depth of 2,200 m. The main dissolved gas is CH4 , the GWR being 3 Nm3 /m3 . The reservoir was investigated by 4 wells, but only one was in use (until the greenhouses in the area have been closed), with a capacity of 5 MWt (of which 1 MWt from the separated combustible gasses). The geothermal water was used for heating greenhouses (bankrupt, stopped operation).

The Cozia-Calimanesti geothermal reservoir (Olt Valley) produces artesian geothermal water, with flow rates between 8.5 and 22 l/s, and shut-in wellhead pressures of 30-33 bar, from fissured siltstones of Senonian age. The reservoir depth is 2,700-3,250 m, the well head temperature is 70-95°C, the TDS is 15.7 g/l, and there is no major scaling (only minor deposition and some corrosion were observed during years of operation). The GWR is 1-2.0 Nm3 /m3 (90% methane). Although the reservoir was exploited for more than 25 years, there is no interference between the wells and no significant pressure draw down. The thermal potential possible to be achieved from the 4 wells is about 14 MWt (of which 3.5 MWt from the combustible gases – if used), but only about 7 MWt is used at present. The energy equivalent gained in this way is 3,500 toe/year. The geothermal water is mainly used for district heating (2,250 equivalent flats), and for health and recreational bathing.

The Otopeni geothermal reservoir is located north of Bucharest. It is only partially delimited (about 300 km2 ). The 23 drilled wells (of which only 17 potential producers or injectors) show a huge aquifer located in fissured limestone and dolomites, situated at a depth of 2,000-3,200 m, belonging to the Moesian Platform. The geothermal water has wellhead temperatures of 58-84°C, and a rather high TDS (1.5-2.2 g/l), with a high H2S content (up to 30 ppm). Therefore, reinjection is compulsory for environmental protection. The production was carried out in the Otopeni area using downhole pumps, because the water level in the wells is at 80 m below surface. The total flow rate was 22-28 l/s. At present, only one well is in use, almost all year round, for health and recreational bathing.

The main direct uses of geothermal heat are: district heating and individual space heating, and health and recreational bathing. In a few places geothermal energy is also used for greenhouse heating (about 10 ha), fish farming (a few farms), industrial processes, and drying. Detailed data on installed capacity and annual energy used is not available by type of utilisation. In areas where the available wellhead temperature is rather low, geothermal water is only used for health and recreational bathing (e.g. Felix spa), or for fish farming, depending on the chemical composition. In other areas, even if the temperature is higher, the geothermal water is still used only for bathing (e.g. Acas-Beltiug and Tasnad), or for fish farming (e.g. Santandrei). In other areas, with higher temperatures and in larger communities, geothermal water is first used for district heating, some industrial processes, and only a part of the heat depleted water is used for bathing (or for fish farming), the rest being reinjected.